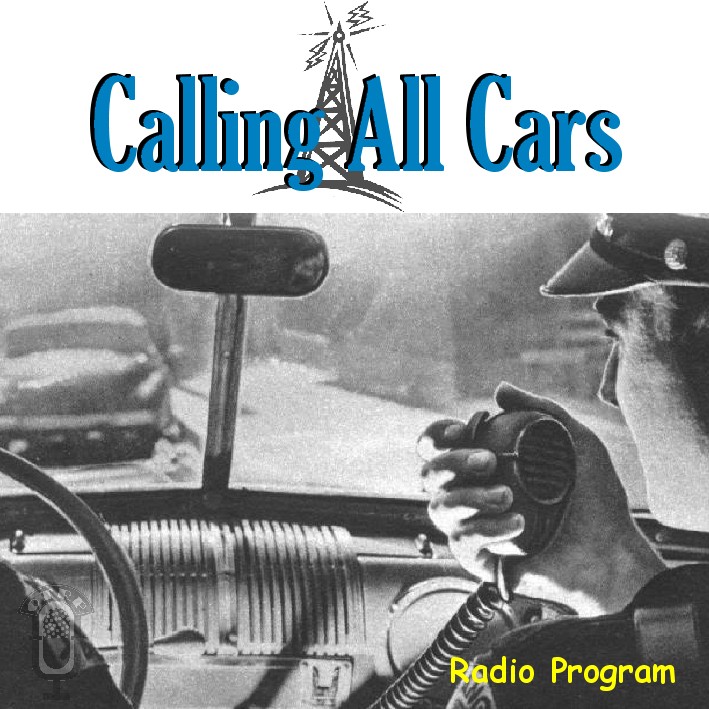 Calling All Cars aired from 29 Nov 1933 until 8 Sep 1939 and originated on the West coast over the Columbia Broadcasting System. The show was sponsored by the Rio Grande Oil Company which was a part of the Sinclair Oil Corporation. The show only ran in areas where Rio Grande "Cracked" gasoline was sold.

The writer-director of the show was William N Robson. Each episode was dramatization of a true crime story, how each crime was solved and justice served. Episodes were introduced mainly by officers of the Los Angeles Police Department. Sgt Jesse Rosenquist, a police dispatcher was a part of the entire run of the series. From the Old Time Radio Researchers Group. See "Notes" Section below for more information on the OTRR.

Reviewer: radiorick62 - - March 27, 2021
Subject: The Human Bomb Episode Error
The Episode Titled "The Human Bomb" from December 20 1933 that you have is not the right episode. That episode is actually about a man who threatens to blow up police headquarters.
Reviewer: mva1958 - favoritefavoritefavoritefavorite - September 15, 2017
Subject: Pretty good for 1934 - Edited to add commentary re language
Before getting into the review, I should mention that of the first dozen or so episodes, only a couple are correctly identified. It's obvious from the "broadcast number" given by the dispatcher at the beginning of each episode; one ep recounts events in 1935, two years after the supposed episode aired. I expect more from an OTRR certified set.

Now, on with the show, er, review.

This is a wonderful snapshot of early 30s pop culture. The dialogue is right out of Little Caesar - "Okay you mugs, get your gats out, see? We might have to take it on the lam after this job - we don't want some wise Copper to snap the bracelets on us!" I cracked up when one cop warns a suspect to calm down, else he might have to use his "persuader" on him.

Of the 60-odd shows I've listened to so far, only a few have given acting credits, but you'll hear some familiar voices. I'm pretty sure I've spotted Will Wright, Frank Nelson, and John McIntyre. Jeanette Nolan and Harold Peary received credits; Peary is in quite a few of these, usually as an officer. Occasionally there's a "big Hollywood star" (Noah Beery Sr. really hams it up as a crazed scientist who fakes his own death in one story) but most of the actors are unknown. One frequent actor sounds a lot like Raymond Massey, but I think it must be someone else; Massey would have been credited for sure as a big time screen actor.

It's fun to spot the stories that were later adapted by Dragnet - the City Hall Bomber, the Badge Bandit, the sleeping porch shotgun murder, plus a few others. I suspect the CAC versions hew closer to the true events. Names of police officers and other officials aren't changed, so you hear references to and depictions of Ray Pinker and Det. Thad Brown.

One thing that jumps out is the lack of sensitivity to coarse language. Five years before Rhett Butler shocked film audiences by not giving a damn, characters in CAC regularly give out plenty of damns and quite a few hells, too. It's a hoot listening to narrator Fredrick Lindsley encourage the kiddies in the audience to join Rio Grande's Junior Police Department, and then listen to the crooks and cops swearing at each other in the episode. Even the ladies get into the act. Probably accounts for why this series faded away instead of living on in syndication.

All in all, a very entertaining series, right down to the early use of integrated commercials and the "Gangbusters" style (but not "by proxy") introduction by the principals in the case.

Gosh, it's swell!
Reviewer: rmodel - favoritefavoritefavoritefavoritefavorite - April 6, 2017
Subject: History
Calling all Cars, yes there is some problems with some of the
episodes, but for the most part just to be able to hear
these old shows from yesteryear makes up the difference/
Vintage I say, Vintage.
Thank You for the upload and all your time.
Again Thanks
Reviewer: AncientAxim - favoritefavorite - March 23, 2017
Subject: No.s 8,9, and 10 unlistenable
So much hash, bass, or what I don't know, it sounds as if someone recorded a shortwave broadcast onto a much-used and re-used magnetic cassette. The audio bandwidth was so narrow, even the most rudimentary of dialogue could not be made out in the program. It's not a picky complaint, the programming was unlistenable. I did not check the other episodes, I forfeited the rest of the episodes after struggling to make it through.

There are other episodes of this program in crystal clear, very good audio, one of the lists for this show has no episode info, but merely "Track !" and "Track 2" but it's worth checking those out instead of being punished with these. Very poor!
Reviewer: oldmusicfreak - favoritefavoritefavoritefavorite - January 26, 2014
Subject: Good show
I liked Calling All Cars. As someone mentioned its no Dragnet, but a very good police program for its day. Some of the episodes are kind of muffled and a little hard to understand, but with no distractions and careful listening its OK. I get a kick out of the cracked gasoline commercials and how they sneak them in the actual story. Great stuff, a lot better than some of the modern TV police shows. Id give it 5 stars except for some of the muffled episodes.
Reviewer: The Bridge - favoritefavoritefavoritefavorite - December 15, 2013
Subject: It was human
I heard this show at a very young age of fives years, and later. I liked the way they talked like humans, not actors or Dragnet characters. I got to know Rosenquist's voice quite well. Many years later I called a customer to ask them a question, and it turned out to be his very nice Wife. In later years with the Los Angeles Police Historical Society as the photo archivist, many people would relate this show to me, and I would help in the history of L.A.P.D. radio. Their call sign was " KGPL " about 1750 kilocycles and was on AM. The last time I checked the call sign is still active, for a religious station in Kansas or Missouri. So it is still going.
"Go get 'em boys."
Reviewer: sbd367 - favoritefavoritefavoritefavorite - November 19, 2013
Subject: Quality
A really decent show, especially if you like police procedural shows. A number of actors who would achieve fame later (for example, Howard McNear) can be heard. William N. Robson's scripts are usually good; I can remember only a few "clunkers." The advertisements for Rio Grande "Cracked" gasoline are amusing. It's no Dragnet, but competent melodrama nonetheless. I was especially surprised by the sound quality since so many shows from this early era are of poor quality and make listening difficult.